Our Associate Resource Consultant Larissa took a little trip to visit Eltham Palace, one of the finest examples of Art Deco interiors in the UK to learn more about its architecture, design and history.

The house itself is one of London’s best kept secrets and has a long history to go alongside it – it was Edward IVs favourite royal residence and Henry VIII spent much of his childhood here. Edward IV built the Great Hall in the 1470s, however by the 17th century, much of the site lay in ruins.

In the 1930s, Stephen and Virginia Courtauld purchased Eltham Palace due to its proximity to London. Stephen was the heir to the Courtauld textile dynasty, whilst Virginia’s father was a wealthy Italian shipping merchant. Virginia was vivacious, lively and eccentric while Stephen on the other hand, was reserved and said very little. Despite their opposing personalities, their marriage was a successful one.

They lived an extravagant life, travelling the world in their luxury yacht ‘Virginia’. They owned a pet lemur, Mah-Jongg whom they adored and they indulged him with great comforts such as a centrally-heated room on the top floor over-looking the garden as well as his own deskchair on their yacht.

Having purchased the site, the Courtaulds commissioned architects Seely & Paget to build a state-of-the-art extension to the medieval Great Hall. Although the extension itself was not without controversy, it was the interiors that stood out.

The entrance hallway, designed by Swedish architect Rolf Engstroemer, epitomises the house - it is opulent, refined yet somewhat eccentric. Australian blackbean veneer line the walls, the armchairs, rug and cabinetry are custom-made, and the whole space is warmly lit from above by a massive concrete and glass dome.

Peter Malacrida designed most of the remaining interior spaces including Virginia’s boudoir, bedroom and bathroom. Her bath is the most extravagant space in house, lined with gold mosaic tiles, featuring a statue of the Greek goddess Psyche as its centrepiece. Meanwhile, in the boudoir, the built-in sofa is one of the earliest examples of its kind. Many of the features in the house, including the concealed lighting, are reminiscent of ocean liners and luxury hotels rather than domestic settings.

Eltham Palace was also technologically advanced. There was a centralised vacuum cleaner which ran off a motor in the basement, the main rooms in the house were centrally heated, an internal telephone system operated throughout the house and a loudspeaker system allowed music to be broadcast to different rooms. 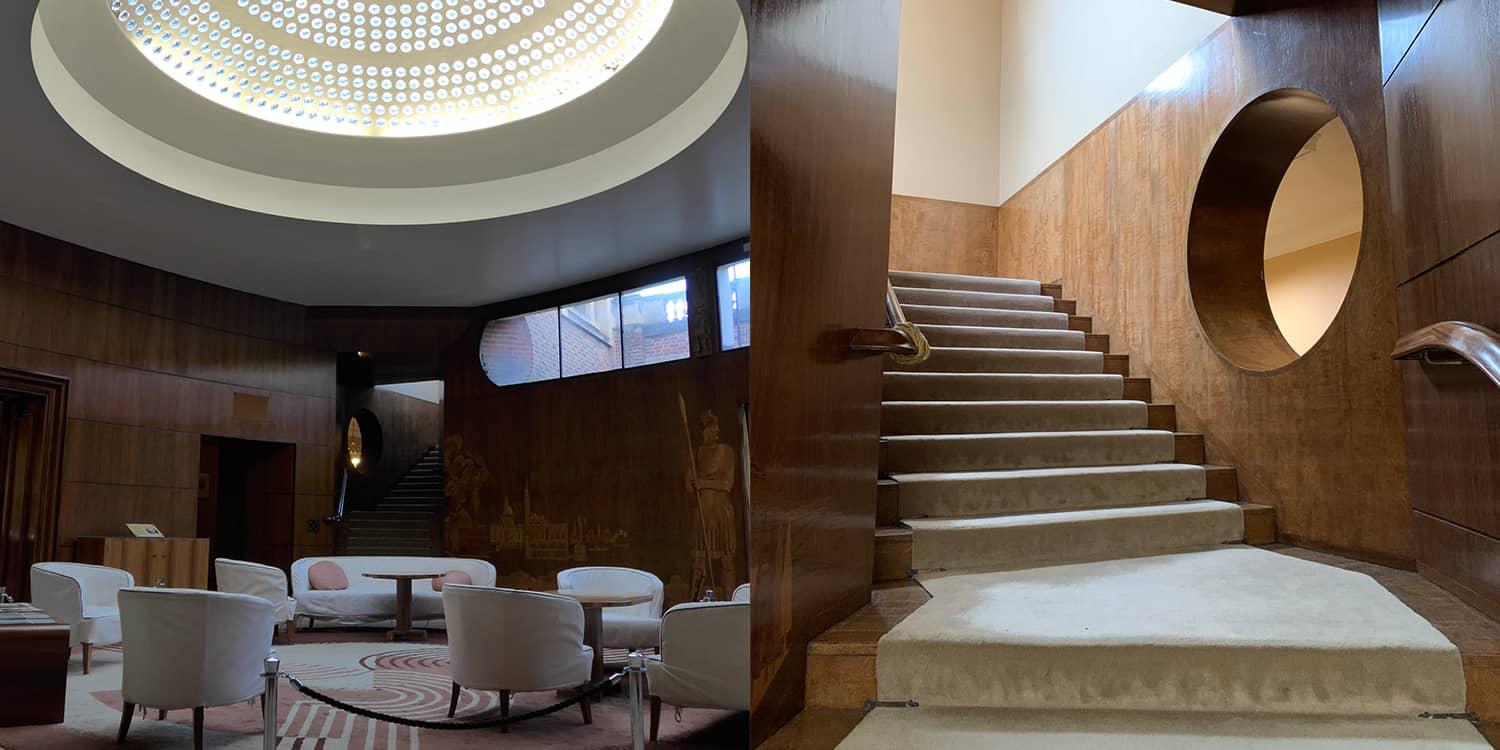 The Courtauld’s eventually moved out of Eltham Palace in 1944 during the war. They relocated to Scotland, before settling into their new home in Southern Rhodesia (currently Zimbabwe). They were involved in many philanthropic projects including campaigning for racial equality. Stephen died in 1967 and donated much of his artwork to the National Gallery of Harare (Zimbabwe).