Roundtable - Hiring in a Shortage

Finding and keeping staff has become one of the UK architecture sector’s most pressing issues, as staff shortages continue to grip the profession. Across the country, Brexit and the Covid-19 pandemic have combined to create a perfect storm for employers. In September, job vacancies in the UK soared to a record high of almost 1.2 million.

In architecture, the shortages are partly down to a lack of candidates from Europe and from countries such as Australia, where a 19-month travel ban was only lifted at the beginning of this month. A recent survey of members by the RIBA found that 18 per cent of practices are having difficulty finding staff.

It is not all bad news. The shortages mean architects’ stagnant salaries are nudging up and the fear of mass redundancies brought on by Covid-19 seems to be unfounded so far. However, the highly competitive market for staff challenges employers when rising wage demands are not accompanied by a hike in architectural fees.

Bespoke Careers and the AJ assembled a group of architects and sector professionals to discuss the challenges, and to gauge how practices are coping with the changes in working practices brought on by the pandemic.

In their discussion, most of the panel agree that it is difficult to find new candidates and that the market is, as Bespoke’s Josh Schot says, ‘incredibly competitive’. Both PLP Architecture’s Sonal Rathod and Buckley Gray Yeoman’s Tina Connell say their practices are finding it tough to discover good candidates.

Schot says the competitive market is partly due to low numbers of people looking to move jobs, because of an ongoing perception of market uncertainty surrounding the pandemic.

Bespoke associate Aly Peel agrees, and points out that what candidates are looking for has also changed. ‘We are noticing that candidates are less driven by what projects companies are doing. It’s more about the people, the culture, flexibility,’ she says.

The panellists agree that practices now have to make more effort to promote themselves throughout the recruitment process. Leonard Design director John Morgan, who has recruited four people recently, says practices need to work harder to sell themselves today. He adds: ‘We used to be honoured to be offered a job. And now it’s an honour if candidates choose to be our employee.’

The panel’s top tips for employers are partly about getting the basics right – such as making sure to book in enough of a director’s time for an interview. Schot also points to the importance of picking the right person to do the interview. ‘Interviewing is a skill, and some people are going to be more inviting than others,’ he says.

Sheppard Robson’s Lisa Byrne says her practice carefully considers the make-up of all their interviewers, making sure to mix ages and genders. With Part 1 candidates, they always ask an existing Part 1 to give the interviewee a tour and have a coffee. ‘That really works for us, because they get to see what kind of experience someone else has had.’

Morgan says that, if the job involves relocating to Leonard Design’s Nottingham office, the practice will pay for train tickets for both the interviewee and their partner to visit the city. ‘Moving is a joint decision. Long gone are the days where one person follows the other person because of their career.’

Another unusual perk at Leonard Design Architects is the company’s ‘open leave’ policy, whereby everyone in the company can have as many days holiday as they want, fully paid. Morgan says: ‘That was a huge shift for us and made us different as an employer. It was a risky move but, way before the pandemic, we realised you’ve got to do things differently.’ 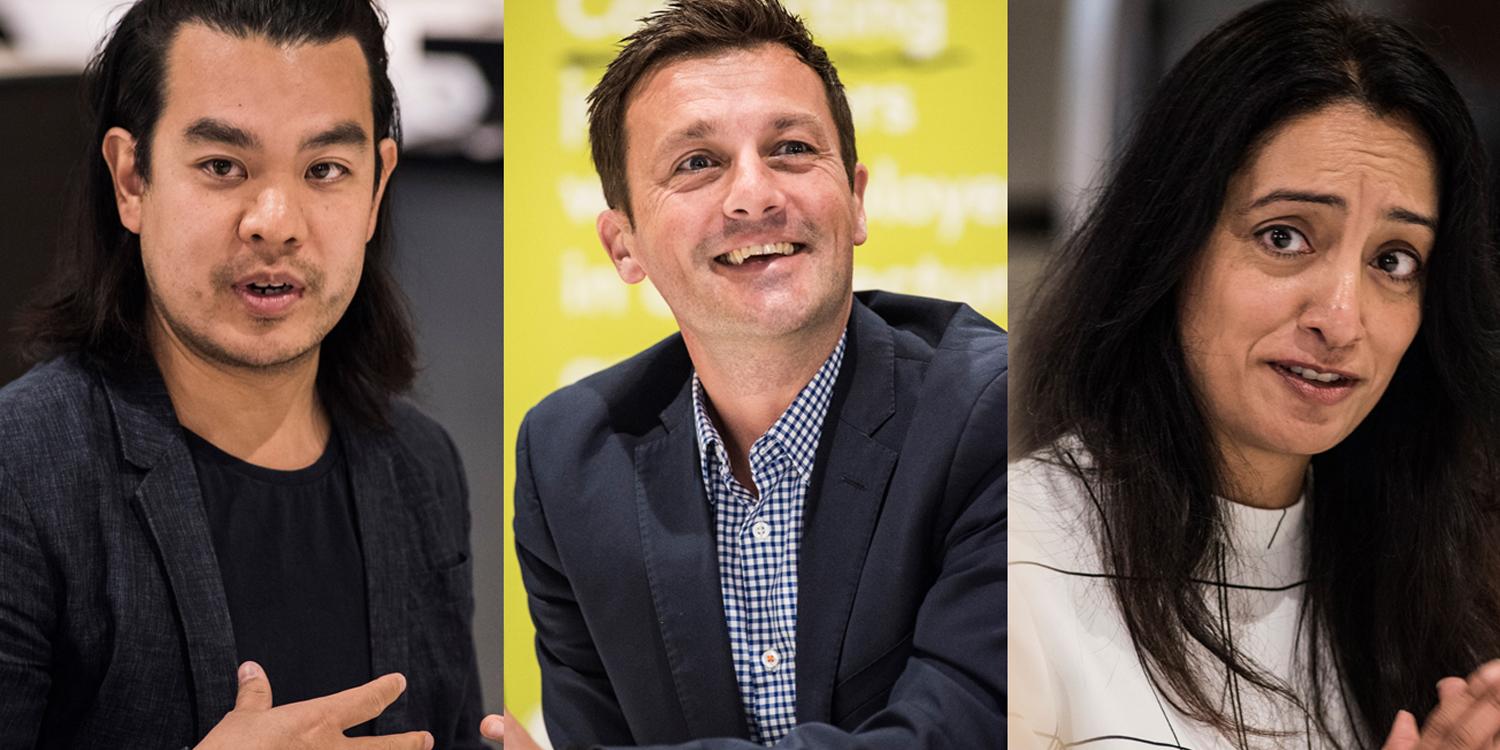 Staff shortages are leading to a slight increase in salaries, the panel agrees. Byrne says: ‘Because of that trepidation about the market, individuals want an absolutely huge shovel to entice them; they want something really worth leaving their security for.’ She adds that every graduate she has hired this year has already had another offer.

Counter-offering is rife, and one of the challenges for employers is keeping pay rates fair. ‘You’ve got to maintain parity,’ says Byrne. ‘Otherwise, you could “overegg” someone coming in, and then they’re sat next to someone who’s been with you for a long time who is paid X amount less.’ She says it can help to explain to new hires that there is an issue of fairness, and that they will be afforded the same fair approach once part of the team.

Schot asks the panellists whether they would be tempted to make an offer outside their salary banding or benchmarking for a candidate who had another offer from a competitor. But most agreed this would only create further problems.

‘It’s a Catch-22,’ says PLP’s Rathod. ‘If they ask for more, your existing staff may ask for that much more. Then the next year they’re expecting that much more again.’ Morgan agrees that going beyond a benchmark to land a candidate just creates more problems down the line. He says three members of his staff had recently left for ‘very juicy’ offers that Leonard Design could not match. ‘So we have to let people go and wish them good luck,’ he says. ‘The most heartening thing for me is that one of those came back to us within six weeks, and on the salary they had originally.’

The phenomenon of returning, or ‘boomerang’, staff points to how the typical career progression of an architect is changing. The panellists note that young graduates no longer necessarily want to join a practice and work their way slowly up to associate level.

DMFK’s Jonny Wong says he interviews some candidates who have moved every two to three years and have never seen a project through to completion. On the plus side, the new generation is keen to see the end of the ‘starchitect’ model, he adds. ‘There’s quite a few practices where people just know that you get worked to 1am every day. But that’s now no longer accepted, which is good.’

While young staff might be on the move more often, they have fewer qualms about returning when practices leave the door open. Rathod says: ‘We keep in contact with leavers. What’s nice about millennials is that they go and experience different practices and then come back to you eventually.’This is common practice in the USA, where leaving a job is considered ‘professional, not personal’, argues Wong. ‘You leave; you move up the ladder; and then they poach you back. And they see it as if they’ve trained you, whereas here, it always seems to be more personal. When you leave, it’s like breaking up with someone.’

Key to getting good staff back is knowing why they left in the first place, which is where exit interviews show their value. Bespoke’s Peel says she is surprised how few companies actually do exit interviews, when the information people provide when leaving can be crucial to improving the practice.

To conduct a helpful exit interview, Connell advises that the leaving staff need to be reassured it’s a confidential meeting and give their permission to share anything a company board might benefit from hearing. ‘It’s about wanting people to be honest and explaining we can’t make things better if they are not honest with us.’ Morgan adds that it is important that, rather than a company director, someone in HR or who is more independent of management should conduct the exit interview,.

As with much of the rest of the country, job-seeking architects’ priorities have changed since the pandemic began. Wong says younger applicants today want more experience on projects, while more senior candidates remain focused on flexibility. ‘A lot of the change of emphasis has come out of lockdown, I think because I don’t remember getting these kinds of questions before.’

Byrne says Sheppard Robson has made changes to its office to make it more open since the pandemic. ‘We’re changing the whole layout. The ground floor is entirely collaborative; you can pop in for a meeting or for sample reviews. Our office is one of our key turning points. It’s a great facility for individuals to choose to come into.’

Morgan says the profession has had to adapt quickly. ‘The industry has had to take staff shortages really seriously. They’ve just kind of had their head in the sand and now they are forced to think about it more, because it’s a candidate-driven market.’

While there are different views among the panel about how well architects can work away from the studio, most agree practices will need to continue to remain open to flexible working. ‘I think people have had a taste of flexible working; they like it and I don’t see any change coming soon,’ says Connell. ‘If you want to be an employer of choice, you’ve got to make sure that you’re offering these things.’ 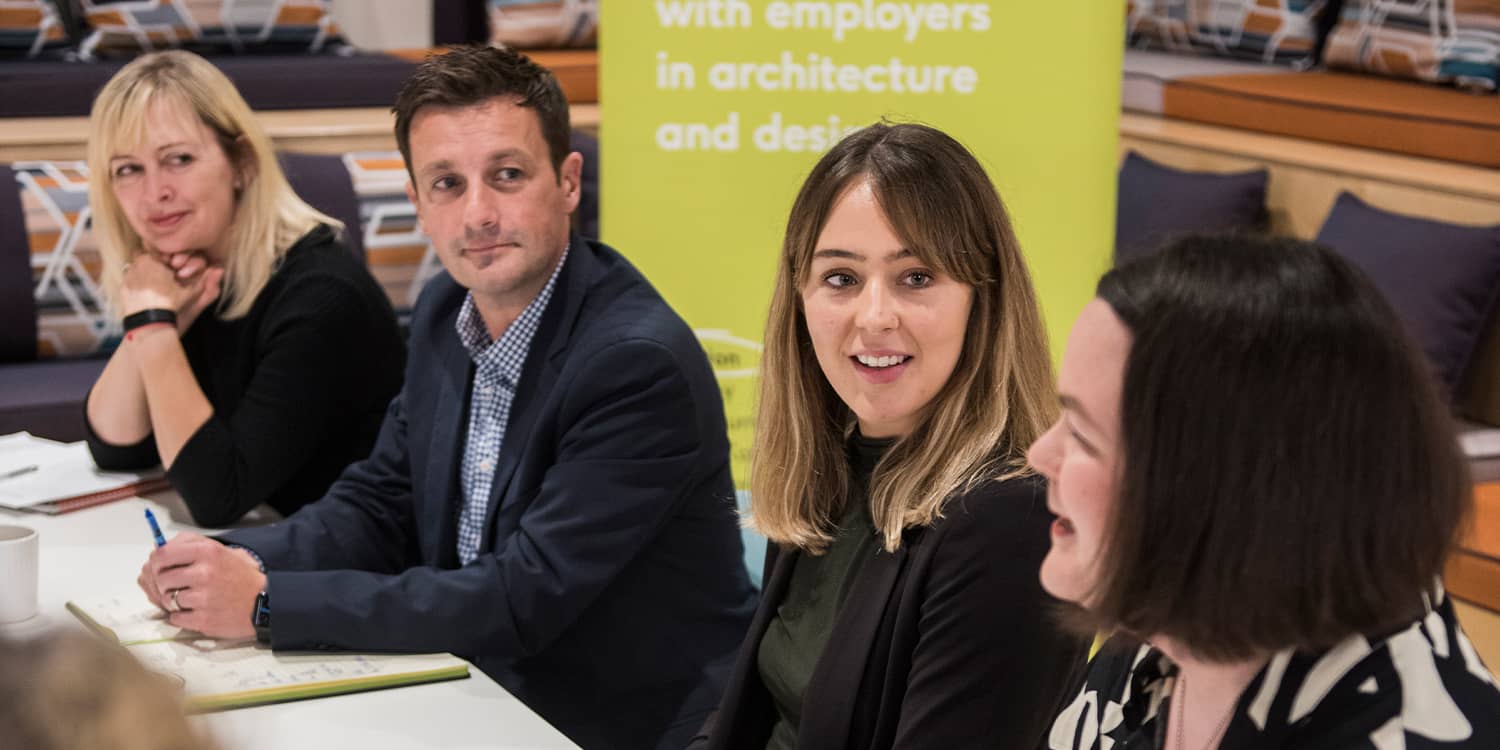 Bespoke Careers
Roundtable – Back to Business in Australia