Roundtable - How will Brexit affect talent recruitment in architecture?

With the UK's departure from the EU scheduled to take place in just 12 months' time, The Architects' Journal and recruitment specialist Bespoke Careers discussed recruitment and retention of talent with a panel of directors and partners from leading practices. Ella Jessel reports.

'I am amazed how few people from the UK are actually in our office. It shows how reliant we are on international staff and talent.'

Richard Keating, director of architecture firm Orms, was surprised when he saw company data showing that more than 80 percent of his staff come from outside of the UK, with half of those from within the EU. But the diversity at Orms is the norm, rather than the exception, it seems, at least for practices in London. In the capital, the creative industries have grown accustomed to picking talent from all corners of the globe.

However, this freedom is now in jeopardy following the Brexit vote. Staff morale, recruitment and retainment, and the 'tortuous' visa application process have become pressing questions for many UK firms: Will architects from the EU still be able to work easily in the UK? With the slump in the pound and the end of free movement, will they even want to work here?

Delegates kicked off the discussion by praising the creative energy an internationally diverse team of employees can bring to a firm. But, when asked by AJ managing editor Will Hurst how the referendum result had affected staff morale, there was a mixed response.

Arup Associates director Jo Wright told the panel it had been 'devastating' to lose a senior staff member immediately following the Brexit vote. 'This is about peoples' lives and careers and where they choose to settle with their families. It's tricky to balance the corporate response and the individual response,' she said.

Others described a general atmosphere of unease. Squire & Partners director Chris Hartiss said: 'There is a sense of uncertainty that's permeating through at a professional level, at a corporate level, and therefore within our business.'

But Lisa Melvin, chief operating officer at Arney Fender Katsalidis, was more optimistic. Despite the 'fear-mongering' over Brexit on social media, Europeans are not nervous about staying in the UK, she maintained. 'I think everyone believes there will be a transition period and I don't have a sense that people feel unwelcome,' she said.

John Robertson Architects director Festus Moffat said that, while his firm had seen a dip in morale following the initial shock result and felt discomfort at the rhetoric surrounding the Brexit debate, things had since calmed down. 'Until we know what it means, there is no point in getting too worried,' he said. 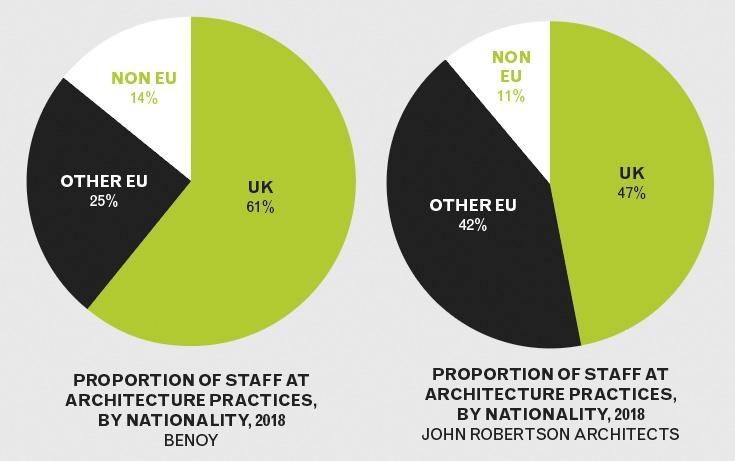 But there are worrying signs that Brexit is having an impact on the UK's ability to attract talent. Lindsay Urquhart of Bespoke Careers told the meeting that in the 12 months following the referendum the company had seen a 39 per cent drop in people applying to work in the UK.

Urquhart put this down to a range of factors, from candidates feeling 'unwelcome' in the UK, to the slump in the value of the pound and booming Anglophone economies in Australia and New Zealand. 'The London salary guide is 15 to 20 per cent lower than in other countries and the pound is low, so financially it doesn't make sense for them to come,' she said.

In addition to the Brexit turbulence, one of the biggest hurdles in recruiting overseas staff is obtaining visas, the panel agreed. Many delegates expressed frustration at the bureaucracy, prohibitive costs and 'ludicrous' delays in obtaining paperwork.

Leo Pemberton from Bespoke Careers said while global applicants still want to work in the UK; firms are put off by the 'hefty price tag' of sponsorship. Agreeing, Wright explained how the minimum salary threshold of £55,000 for a Tier 2 visa 'does not stack up' for architecture firms, and said there seemed to be 'no government will to keep the creative industries going'.

Allies and Morrison partner Jo Bacon also agreed, saying the visa process was 'prolonged, expensive and tortuous for the people involved'. She voiced concern that London would lose its 'responsiveness' and its reputation for creativity and design.

Melvin pointed out that the issue of visas is a bigger problem for creative industries because they have less financial clout. 'It has financial implications for us which investment banks and law firms do not have - they will always just pay whatever it takes to bring in new talent,' she said.

In addition, Benoy director Fong Luong said the struggle to recruit overseas talent had become more urgent because of the scarcity of suitable candidates from the UK. She told the meeting: 'There is a shortage of home-grown talent because of [the high level of] course fees and then we can't bring in talent - we're stuck.'

The panel also highlighted the importance of keeping hold of existing staff. Keating said Orms was encouraging retention by making the firm an employee-owned trust - a move he hoped would give staff more of a stake and improve wages.

Bacon raised the point that it was not only EU staff that need reassurances and that UK architecture graduates are also looking for opportunities elsewhere. Recent graduates no longer necessarily consider London a creative hub, she said, adding: 'Graduate salaries are not enough to see the positive side of London.'

Agreeing, Bespoke's Leo Pemberton told the panel his firm had seen many graduates overlooking London for the North-West, particularly Manchester, where salaries are reaching parity with the capital, as candidates weigh up their livework balance.

Luong seconded. She told delegates architects at Benoy prioritised flexibility and variety in work over salary. 'They want the opportunity to explore and use London as a hub for travelling around the world,' she said.

Beyond salaries, what broader impacts is the Brexit situation having on the architectural sector? The picture is a mixed one. Moffat and Hartiss returned to the prevalent atmosphere of uncertainty, with UK developers spending money incrementally. Hartiss said: 'It hasn't pushed us into other sectors, but has made the sectors we're in evolve.'

Moffat also pointed out that, while domestic developers might have expected prices to drop, the market is still buoyant because of continued foreign investment in London from Malaysia, China and Japan.

However, Wright and Keating said their firms had actually been taking on more work since the vote. Orms had grown in size, Keating said, explaining this was partly due to the practice's experience in refurbishment schemes that are popular options at present, perhaps because they do not incur the same level of investment or risk as new build.

Pemberton said smaller architectural firms were struggling, especially those involved in high street retail, a sector which has struggled to bounce back from the pound's relative devaluation.

The discussion ended on a positive note with a consensus amongst most of the panel that, instead of hand-wringing over Brexit, architecture firms should take action to secure a better deal for the creative industries. Both Wright and Bacon called for greater leadership on Brexit from institutions such as the RIBA, the Creative Industries Foundation and the Design Council. 'We're not galvanised by our industry leaders to push these ideas forward politically,' said Bacon. Echoing the call to action, Keating called for architects to 'make more noise', and Moffat said practices should be more involved in the debate. Melvin expressed optimism, saying the UK's big cities depend on more than just the EU for economic stability: 'London is a global centre … we saw in the last recession the economic impact of what goes on in the world is a greater risk than Brexit.' Hartiss added: 'Creatives always are optimistic as it's in our DNA to want to change the world.'

Bespoke Careers
Roundtable – Back to Business in Australia

The Architects' Journal
Roundtable - Working Well During The Pandemic